Fall is my second favorite season (summer is numero uno) because it’s a welcomed break from the extreme hot temperatures, humidity and all of the not so fun stuff that comes along with summer. On certain Fall days where the temperature is just right, I can always be heard saying, “It could just stay like this all year around”, it feels good and it is a good transition period between the two extremes: Hot and Cold. The Fall season is also what I often refer to as the Recycle season. It’s something about the cool air that makes people want to slow down a bit, settle and dare I say snuggle - hence the birth of Recycle Season! 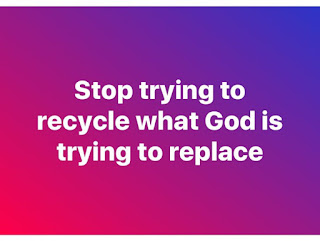 Girrrl I hear you saying, what is recycle season? Ok, this is when we are heading into the cooler seasons and people attempt to recycle friendships that have already ended. This season is characterized by going through your phone/email list and reaching out to that old boo so that you have someone to snuggle up with when the weather gets cold. Particularly in the Northeast part of the country, this happens even if it’s just to have someone help you dig your car out of the snow (sorry ladies, but that’s trifling - lol). Men recycle too, but the subject of this narrative is for my ladies: Stop trying to recycle what God is trying to replace!

3 reasons not to recycle:
-When you recycle, you forfeit the new.
Girrrl, you so busy calling up ‘ole boy and when he comes around, he’s blocking anybody that may want to come around. A new guy will pass you by if he see ‘dis fool hanging around! Staying stuck in the old and what could have been will make you forfeit the new!

-When you recycle, you forfeit time for personal development.
Learn how to be with you! If you’re in between relationships (I hear some of my seasoned saints saying it’s been a long in between!) it’s okay, choose to be in a relationship with YOU, don’t waste time going backwards. Time alone is time for personal development. Look at the books you’d have time to read, new things you’d have time to create and the time you’d have to work on yourself. You ain’t got time to recycle!

-When you recycle, you repeat old disasters.
Look, I do believe people can change but from my experience they don’t change all that much! When you recycle that man, you will find that not too much has changed with him at his core. He may re-package it in the beginning but when you peel those layers, you’ll find the same foolishness that caused you to leave him alone the first time - is still there! The same irritants will resurface and the same arguments will rear their ugly heads! Girrrl, you ain’t got time for this!

Recycling is for trash, not people. If it didn’t work before, it will likely not work again. Then you’ll just add more months to the ‘time wasted’ pile. God is working on the replacement but you’re prolonging the process by keeping the recycled around. It’s totally okay to just be with you, I mean if you don’t like being with you why would you expect someone else to like being with you? Girrrl, get it together!

***There are exceptions to every rule but be very clear, for that couple that you know that recycled and now they are happily married (I know one too) they are the EXCEPTION and not the RULE.***