Get Rid of Negative Thought Squatters!

Negative thoughts, we all have them from time to time. Sometimes they come in quickly like an express train that is 10 minutes delayed and other times they linger like Baptist church people after service is over. They are the thoughts that can speak to the core of your soul and make it difficult to discern the truth from the lies. Negative thoughts like: I’m not good enough or I’m too much of this or too much of that. Whatever the thoughts may be for you, you can get past them.

One thing about a negative thought is that they rarely show up out of nowhere but rather they been planted some time ago and over time, they’ve been watered by life’s experiences and our beliefs about ourselves. We can almost look at them as seeds that have been planted in our psyche over time, buried beneath and then they grow. I equate negative thoughts to squatters. You know squatters right? The people who take up residence in a property they don’t own. 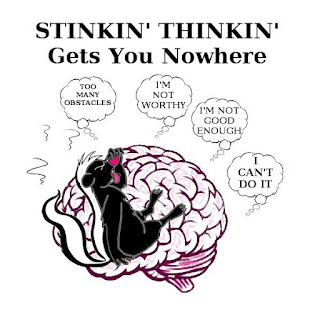 True story:
Shortly after my father passed away we were left with the task of cleaning out a property that he owned. There were people living in there paying rent to one woman who was living in the house also. She was collecting rent and pocketing cash on a property she didn’t own (yeah Baltimore off da chain!). Long story short, we asked her to leave and she refused. We called the police and much to my surprise they sided with her! We had to go through the courts because apparently squatters have rights! I’ll never forget the day we came to the house when they were actually evicted. Even with the notice on the door they still didn’t believe they were about to be evicted. When we arrived with law enforcement deez fools were cooking breakfast – I can remember the stench of the pork bacon frying on the stove; I didn’t eat bacon for like 3 months after that! The whole ordeal was a complete hot mess!

Just like this woman became a squatter in my father’s property, negative thoughts can squat in our minds, hearts, and spirit. They linger there, hangout, cook up bad smelling breakfast and fully take up residence in a property they don’t own! Glory be to God that the eviction process is not that extensive for the believer and the ‘negative thought squatters’ don’t have rights! The God we serve is the property owner, the law enforcement, the judge and the jury and He can evict them for good! Just hand those thoughts over to Him – relinquish control!

How? Fill your mind with God’s Word! Light and dark can’t co-exists, when light moves in darkness has to exit stage left! God talks about the mind a lot because He knows that it is one of the main weapons in the enemy’s arsenal: to attack the mind. Whether it is to send discouragement, depression, or low self-esteem our way, all of these things start in our minds. That’s why God says to “let this mind be in you which was also in Christ Jesus’ (Phil 2:5) because He knows that’s where the spiritual warfare takes place. So as it relates to the mind focus on these three things:


Begin to think differently, this will in turn enable you to move differently. Allow God to evict the negative thought squatters so that you can operate fully in Him!