The Puffer and the Poofer!

May 23, 2016
In the last post we talked about ‘the puffer’, you know the guy who blows smoke but never follows through! I believe we resolved to Puff, Puff, Pass on him! In this post I want to introduce yet another type to steer clear of and he’s better known as ‘The Poofer’ and offer some tips to recognize both of them early and run for your life!!

The Poofer (sometimes referred to as 'ghosting') is the guy that goes ‘poof!’ and vanishes into thin air. We may as well call this dude Casper, the not so friendly ghost!! We’ve all encountered him at one point or another he may have poofed early or may have waited until he was months in but before you could blink your eyes good - Poof! He was gone. 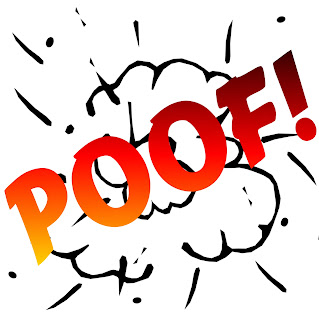 Here’s a scenario: you go out on a date with this handsome suitor, you enjoy dinner, music, the park or whatever and you have great conversation and a great time in general. The night ends and you’re smitten, secretly fantasizing about the second date. Then out of nowhere your handsome suitor date goes POOF!

Here’s another: you begin dating this guy and things are going really well, 3 months in he’s introducing you to family members, you’re doing holidays together and taking weekend excursions (with accountability partners of course - go ahead, roll your eyes!). Suddenly you begin to notice him becoming distant. You scratch your head and wonder why and then just like that he goes POOF!

I gave the two scenarios because the POOF can come at any stage in the game. There are many reasons why a man goes poof such as:

The list of why could go on and on to eternity. The reality is, many puffers and poofers are not bad people but you certainly can conclude they are just not for you.

Here are some tips to recognize a Puffer:

Puffers are very recognizable because their words and actions are unaligned. The Poofer is a bit more ambiguous and is not as recognizable as the other.

Here are some tips to recognize a Poofer:

This is not to say be leery of the super, overly nice guy because quite frankly that’s what you want! This is to say pray for some discernment because many times this is what it takes to recognize a Poofer!

When the poof happens it can be painful, hurtful and ego-bruising. However, this too shall pass!
You will be alright as many of you can attest. Just know the poof was for your own good, let him be someone else’s issue.

We’ll pass of the Poofer too!!