Do You Want It?

April 22, 2020
I’m always amazed when I cut off the lights in my room at night. When I first turn them off I can’t see anything and I literally feel my way through to my bed. But something happens halfway through on this short journey - my eyes adjust to the darkness and then I can see better than I could a few seconds ago. Life can be that way too because when you’re in a place of brokenness it is hard to see your way through so you begin to reach out and feel your way. But at some point while in a dark place, your eyes begin to adjust and you begin to adjust to the darkness, the dysfunction, and the despair. The darkness in your life is so overwhelming that you begin to adjust to the new normal there. These are mere survival tactics while in your place of brokenness but ladies we are called to come out of that place and not dwell there. 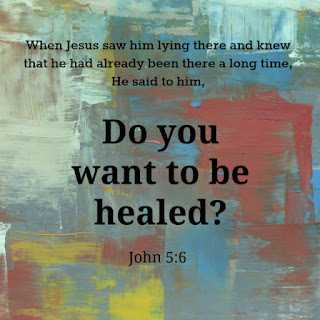 I’m reminded of the Biblical story of the of the pool of Bethesda where a multitude of sick people laid out waiting for the move of the water. An angel would come down at a certain time each year and stir the water, the first person to get in would be healed of their infirmity. At this pool was a man who had an infirmity for 38 years! Let me park here for a moment. This passage of scripture speaks of people with physical infirmities but I want to address those with mental and emotional infirmities as well. You’ve been in this place for a long time - place of depression, brokenness, anger, bitterness, lack of forgiveness, low self-worth, poor self-image, people-pleasing, and the list goes on. Sometimes we remain in these places and sit on these “porches” for so long that we become accustomed to life there. We give up any hope of coming out because we’ve come to a place of acceptance that this is how it is and how it’s going to be. I wonder what the man at Bethesda did year after year of being at the pool, not doing anything for himself and probably feeling hopeless. I mean knowing that the angel came at a certain time each year one would think that he would make preparation to be ready for the next time the angel showed up. I would think he would push himself, roll himself, beg someone to put him close to the edge of the pool so he’d be ready for the next stirring of the water! But instead, he just laid there.

When Jesus posed this question to the man his initial response was to make an excuse! According to John 5:7, he replied, “Sir, I have no man to put me into the pool; but while I am coming, another steps down before me”. Jesus didn’t come back with a snappy response like, “that’s not what I asked you!” but rather He spoke in His authority and told the man, “Rise, take up your bed and walk”. The Bible says that ‘immediately the man was made well, took up his bed, and walked’.

I encourage you today to seek the face of God, spend time in His presence and hear from Him. I believe God wants to deliver you and bring you to a place of freedom in Him! Do the work you need to do for yourself, now is the appointed time! I believe that most people ‘want it’, whatever that ‘it’ means for you but I believe that the issue is your belief in whether you can actually have it!

Father God we bless your name right now and honor you as healer in our lives. We fully submit our lives over to you so that you can shape, make and mold us into what you want us to be. You said in your Word that if we delight ourselves in you, you would give us the desires of our hearts. We desire to be free in you, free from the stronghold of depression, anxiety, doubt, and despair. We are your children and we believe what you have said about us in your Word. Lord, forgive us for unbelief and help us to stand firm and strong in your Word. Lord we love you, we adore you, we magnify you and make you great in our lives today! It’s in the name of Jesus that I pray this prayer. Amen.