Setbacks Are Set-Ups for Comebacks! 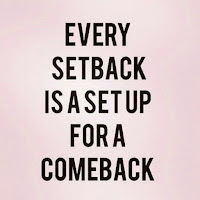 If you’ve lived long enough you’ve experienced some setbacks. Whether it is with your career, school, business, or just your personal life, we have all had a setback or two or three or four (you get the picture)! When things don’t quite work out as expected It tends to bring on feelings of depression, discouragement and despair. These places of emotional residency are not where God wants his believers to reside and settle but rather they should just be a short pit stop at best, as you push your way through this thing called life.

Why? Because they are the foundation for your next set-up! I hear you asking how can that very thing that has weighed me down, caused me to suffer and almost taken me out be the catalyst for my victory? The answer is God! God has a way of setting things up just right and making them all come together for your good! I’m reminded of the story of Joseph. His brothers were jealous of him and conspired together to get rid of Joseph. They put him in a pit and decided to tell their father that wild beast had eaten him. But the plan changed when some travelers were coming by on their way to Egypt. So the brothers decided to sell Joseph to these people for 20 shekels of silver. Those people in turn sold Joseph in Egypt to Potiphar, an officer of Pharoah. The Bible says repeatedly in this story that the Lord was with Joseph. Joseph went from the Pit, to the Palace, to the Prison and back to the Palace as head over all of Egypt (Read Genesis Chapter 37-47 – it literally reads like a novel)!

The point here is that even in Joseph’s setbacks the Lord was with him and the Lord had a plan for Joseph’s life and the life of the people of God! God used Joseph to protect His people during the famine – everything was a part of God’s plan!

The Bible says in Romans 8:28, “And we know that all things work together for good to those who love God, to those who are the called according to His purpose”. Do you believe this? Do you believe that God has a plan for your life and that He is in total control just as he was for Joseph? Joseph’s setbacks were in place to prepare for God’s Set-Ups! So it is with you. God is working behind the scenes even in the rough seasons. He is using the setbacks as set-ups for your comeback!

Setting you up for success in your life: family, career, business, finances, relationships – EVERYTHING!

Next week let’s look at Romans 8:28 a little more, there are some key things in that verse that we must be clear and sure on. We gotta believe this thing for real in our hearts, minds, and spirits!